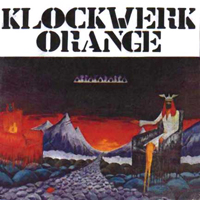 The one and only album from this Austrian band.

Listed as Symphonic Prog in ProgArchives, I purchased this album with a lot of expectations. I felt it was time for another chunk of ELP inspired symphonic prog. In particular after the tragic passing of Keith Emerson.

There has been a lot of bands inspired by The Nice and ELP. This band should be included among these bands. The first minutes of this album, indeed the first twelve minutes long track is very much down the ELP and The Nice alley. A lot of church organs like keyboards.

But Klockwerk Orange is not a The Nice and ELP copycat. Their inclusion of trumpets with the same sound as a Sergio Leone western movie soundtrack is bewildering. But it also suits this music too.

There are some vocals before this album goes a bit overboard and into the avant-garde territory. Which is far from the ELP and The Nice territory.

The vocals and those melody lines is btw very naive and very much rooted in the mid 1965. It is beat music and it is a bit pop music too.

The synths and keyboards sounds is good here. Interesting too. The melodies not so good. I am not particular impressed by this album which spans over a lot of valleys and peaks. It is a decent to good album which will appeal to the symphonic prog collector. But not to everyone.