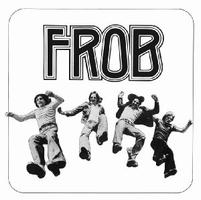 Another one album wonder band from Germany.

Frob was a quartet with a lineup of bass, keyboards, guitars and drums.

The band is listed as a krautrock band in ProgArchives. But as many other reviewers has also noted, this band is not playing krautrock at all. A bit strange, that krautrock label when it comes to Frob.

Frob was a fusion band. No less and no more. Their fusion can be compared to a bit Soft Machine, a bit National Health and a lot of Iceberg, Ibliss and ExMagma.

The bass are pulsating like mad and the drums are following up these pulses. The guitars are the main solo and melody leading instrument here together with the keyboards.

The music is both fast and energetic. It is also full of interesting details and melodies. Despite of the reasonably bad sound, there is a lot to enjoy here.

This album is closing at forty minutes and it showcases a band I would have wished some more albums from. This is indeed a very good album from a band who had a lot of promise. Promise not fulfilled. Shame !