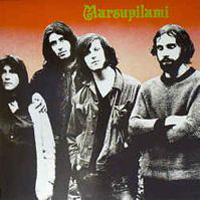 The debut album from this British band

This band released two albums before they broke up. They were a sextet with a lineup of bass, flutes, organs, drums, guitars, percussion, harmonica and vocals.

Listed as an Eclectic Prog band in ProgArchives, I approached this band with an open mind. A wise choice as this album has a heady mix of.....

Well, let's start with blues. That is their roots. Then take a lot from King Crimson, Gentle Giant and some of Genesis and Yes. I have heard they have been compared to East Of Eden. A band I have yet to hear a tone from. I would compare them to Gnidrolog though.

The flutes are everywhere and so is the heavy organs. The music is both complex and melodic. Eclectic, this album is.

There is a lot of very interesting details and melody lines here. The vocals is also very good. The flutes is sometimes off key as a sound effect. Very effective indeed. The guitars are sharp and to the point.

This is a good album from a band I have never heard about before. A good forty minutes long album. Check out this good album.