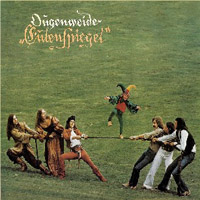 This German band was a sextet on this album with mostly accoustic instruments + electric guitars and vocals. German vocals. Both male and female.

The band was operating in the more medieval folk music end of the folk rock spectrum. These songs could had been written 2-300 years ago in pubs and taverns in Bavaria and the rest of Germany. A country then split into several small states.

The vocals are very good. Both the male and females.

The songs are very much rooted in the past. They are pretty easy on the ear and would work a lot better if I was tanked up with a lot of beer. This review has been written by a stone cold sober reviewer, though.

Even stone cold sober, I really like this album a lot. This is indeed a good album where the good melodies shines through. Melodies which deserves to be heard loud and clearly.

I am not a big fan of folk rock. But this is a good album. A forty minutes long album which really shines a lot. Check it out.