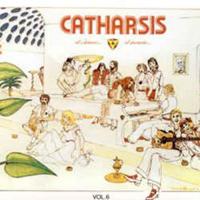 The sixth album from this French band.

Roland Bocquet has again gathered his troups and that for the final time. He and his Farfisa organ has again company of bass, drums, piano, percussions, guitars and vocals. Both male and female vocals.

Catharsis was always an odd band and this album confirms that oddity. The album is again heavily relying on the Farfisa organ and all the life Roland is able to get out of it.

The album is also pretty much a jazz album with some heavy symphonic prog leanings too. Which is a bit of an odd sound. Not to mention; a strange form of music. But this really works.

The album is perhaps too much muzak jazz at times and I feel that the life of Catharsis is ebbing away on this album. On this thirty-three minutes long album with some rather short pieces.

I would rate it somewhere between decent and good.