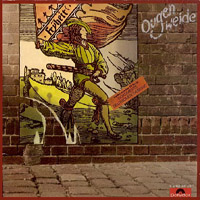 Ougenweide was a pretty unique folk rock band. Their influences was clearly more from the medieval ages than the 19th century.

Hence their use very old acoustic instruments in addition to more modern instruments like bass and guitars. The band was a sextet on this album. That includes a female vocalist who delivers German vocals. So does the male vocalists too.

I am no expert on medieval music and bands. This scene is not really my thing. But Ougenweide has delivered some good albums before this album.

The band has tried to become more commercial acceptable on this album as the band has moved a lot closer to the territory occupied by Jethro Tull. The songs are a bit easy on the ear. Plenty of flutes and electric guitars can be found on a couple of songs too. Jethro Tull has indeed got their territory invaded by this band.

But there are still a lot of good old Ougenweide here. Plenty of dulcimers and haunting vocals. Both male and female.

There are no really good songs here and I am not happy about the invasion of the Jethro Tull territory. There is still enough to reasonably satisfy their fans on this forty minutes long album. A pretty dark album it is too. But the band is really only threading water here and I am not that interested in this album.

This album is somewhere between decent and good. It is not their finest hour.