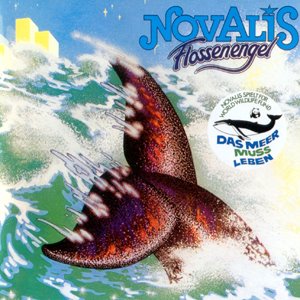 Novalis was a five piece band on this album. The lineup was drums, bass, guitars, keyboards and German vocals.

I was not that impressed by their previous two offerings. So I dropped this band for a couple of months and did not bother about the two remaining albums I have got of them. But both curiosity and a sense of duty is a major driving force in my life and I decided to review these two albums.

Listening to this album, I am really happy with that decission.

The band has gone back to the past and their original modus operandi. Symphonic prog with psychedelic and space rock influences in other words. And that is what we get here on this forty-five minutes long album.

There is a lot of Eloy influences here. Ditto for Agitation Free and Pink Floyd influences. The music is at times very much floating around. Then there is also some more heavy stuff. A bit hard rocking at times.

The more spaced out parts is what I really like the most here. But this is really an album which positive surprises me because it is both edgy and melodic. And some of the melodies are great too.