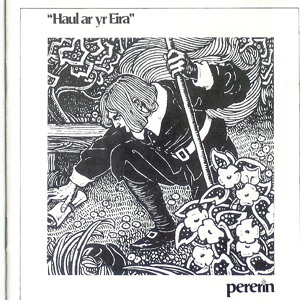 The debut album from this Welsh band.

Pererin was a five piece band with a lineup of bodhran, flutes, congas, bongos, bass, acoustic guitars, keyboards and vocals. Both male and female vocals. The language is Welsh.

I reviewed their second and most known album Teithgan back in October 2010 and found that a good album. So when I finally got the chance to get their three other albums, I picked them up.

This album is much less a folk rock album than the follow up 1981 album Teithgan. The music here is much more songs and folk music focused.

The vocals is really great and the sparse instruments are really good too. Less is more is what really this album is all about. The lush vocals harmonies creates a great sound, though. A sound that fills my speakers.

The flutes and bodhran is also adding a lot to this album. The bass and acoustic guitars is keeping up the rhythms and means the band is in cue. An album which is songs and vocals based.

I have always (Read: After October 2010) kept this band in mind because I felt back then that this band was something special. This has been confirmed by this album.

My main gripe with this album is the lack of any great songs. There are none. Not every songs here are even good. Nevertheless, Pererin is a special band with a special sound. A sound created by their language; Welsh. It is an album well worth checking out and a very good addition to any folk music and folk rock collection. Check it out.