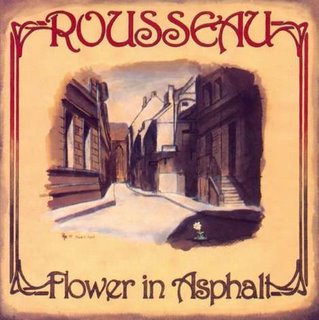 Rousseau, named after a philosopher, was a five piece band with a lineup of guitars, keyboards, synths, bass, drums, flutes, mellotron and piano.

Germany has got some rather obscure, unknown symphonic prog bands. This band is one of them.

Unknown, obscure but still well worth checking out. There are hidden gems among these bands and their albums.

Rousseau's debut album was devoid of any vocals. Which is not a problem at all in this case as the music is pretty interesting. All the thirty-seven minutes of this album.

It is obvious that both Novalis and in particular; Camel has been a huge influence here. The music is pretty pastoral and it is leaning towards classical music. Not classical music as in the bombastic ELP take on classical music. Rousseau is much more softly spoken and gentle in their music. Very Camel'esque in fact.

But you can still hear that this is a German band as they have also adopted Novalis and their take on symphonic prog too.

The end result is a very pleasant half an hour and some minutes of music. One you can relax to. This is indeed a good album from a band who in total released four studio albums. I am already looking forward to reviewing the two other Rousseau albums I have purchased.