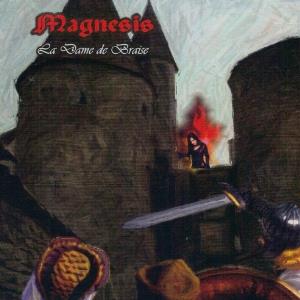 The eight album from this French band.

This band is a sextet with a lineup of guitars, bass, drums, keyboards and French vocals.

I have always been a fan of symphonic prog. Genesis is one of my alltime favourite bands. The Peter Gabriel era of Genesis, that is. Phil Collins never made it for me.

I have also discovered the French symphonic prog scene from the 1970s. The likes of Ange and Mona Lisa. Two great bands in my estimations and Ange is one of my alltime favourite bands. I love that French scene. A scene made even better these days with new bands like Gens De Luna and...... Magnesis.

Magnesis released their debut album back in 1993 and has become better and better with each album.

They are very much influenced by the theatrical, symphonic prog of Ange. A mix of Jaqcues Brel and Genesis. That is in essence what the band is offering up on this album.

The spoken words inbetween the very good vocals is very much what this scene is all about. That and a vintage sound going back to the 1970s and Ange.

This album has a mix of instrumentals and vocals/spoken words driven songs on this forty-six minutes long album.

Not everything here is great. But there are some great pieces inbetween some good stuff too. The end result is a very good album which I really like. Check it out among the rest of the Magnesis albums.