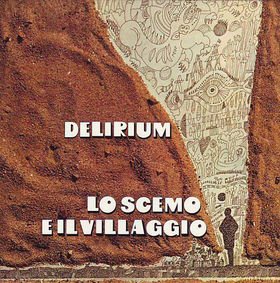 Delirium was one of those bands who graced the Italian prog rock scene in the 1970s. They are to a large extent also around these days with gigs and a live DVD released a few years ago.

Their original vocalist Ivano Fossati had left the band by now and were forging a very successful solo career. Martin Grice had taken over the microphone and he is doing a great job here. His voice is very powerful. This on an album which still retains some of the cheesy Italian pop from their debut album, I have to say. There is a lot of cheese around here.

Most of the music here is complex enough to really interest me. It is also very jazzy and is dropping into a bit avant-garde at times. Most songs on this album is great too. There is always something interesting going on here. Woodwinds, keyboards, vocals, piano, guitars, bass and drums who adds a lot of extra textures to this forty minutes long album. An album which is very playful at times.

Lo Schemo E Il Villaggio is rightly regarded as a classic album in the Italian progressive rock scene and I can only add my approval of this great album too.