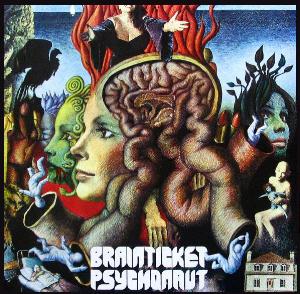 Well, Swiss in the name. The Brainticket line up from the debut album Cottonwoodhill were disbanded and the Belgian keyboardist/flautist Joel Vandroogenbroeck reformed Brainticket with new members. The rest of the band went on to form Island who released one album. I think I have already reviewed that album.

New lineup thankfully meant a new direction too. In this case; towards a more songs based krautrock direction. The music is far from standard rock, though. It still retains a weird Indian flavour. There are some strange rhythms and song structures here. We still get some strange chants and distortions. This time though, it feels like it serves a purpose. The music here is best described as psychedelic krautrock with female vocals. Those vocals is supported by weird and (reasonable) wonderful keyboards, guitars, bass, drums, tablas and sitar.

The six songs on this far too short album.... well, perhaps short enough album, is very good. There is a drive and a purpose in these songs. The Indian flavour is great too. The sound is the typical 1970s krautrock sound. The music still retains enough avant-garde aspirations to make it even more interesting too.

This is one of the better krautrock albums I have ever heard and I am considering giving it a great status. The album is lacking the dot over the i, so I want to leave it at a very good status.