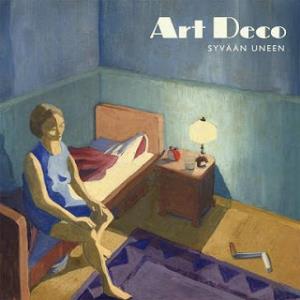 Another band from the now pretty strong Finnish prog rock scene. A scene which takes a lot from the Finnish 1970s folk and jazz rock scene and adds a progressive rock twang to it. Art Deco is one of those bands who thankfully sings in their native language too. In this case, Finnish. The female vocals by Jaana Makinen suits this music down to the ground. She is backed by guitars, keyboards, drums and bass.

Their music is pretty much rooted in the 1970s jazz and folk rock music. Add a lot of eclectic prog, symphonic prog and neo prog to the party and you get this album to a large degree. The band uses both half-acoustic and electric guitars in their sound in addition to some keyboards. The keyboards sound is great.

I would say the sound is very contemporary too while it is still looking back to the 1970s. Art Deco is not a retro progressive rock band.

My main gripe....... This album with this difficult title is missing some great tracks and some tricks to make it stand a head above the majority of the debut albums from the last two years. It is by all means a good debut album and a great start. That is all I can say about it. I hope we hear more from this very promising band.