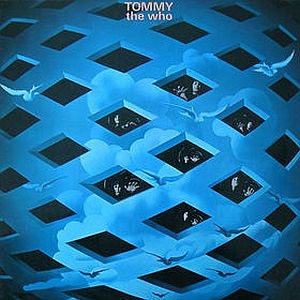 I have never been interested in this band. But after reading Pete Townsend's excellent autobiography (paperback version), I decided to lend them my ears.

The Who is one of those big bands from the 1960s and they are still very much touring. Now with their only two remaining members Daltrey and Townsend + other musicians.

Tommy was their fourth album and their first of two rock operas. Tommy was also one of the first ever concept albums and rock operas. It most certainly launched David Bowie and some other artists excesses during the 1970s and to this date. Tommy also has a legend status. It is also a great piece of music.

The Who were a mod band and operated in the borderland between pop, hippie, hard rock and working men clubs. Music wise, Tommy is in that area. The music is not complicated. The lyrics deals with childhood abuse and not so pleasant things. The lyrics, through Roger Daltrey's excellent vocals, is pretty thought provoking. They hits home.

The album has some great tracks and some fillers who acts as bridges between the great stuff. Listening to it from start to beginning gives the story meaning. There is a theme going through it. In this respect; Tommy is the best rock opera I have ever heard. The whole concept works very well.

This makes Tommy a great album in my estimation and one who really impresses me. I am sure this is sentiments generations after me will share too. A great album.