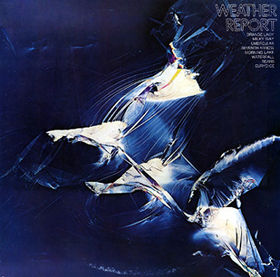 I heard a lot about this band and their music when I grew up as they were quite regular on Norwegian radio back then. They never really interested me though. Thirty - forty years later, I have become quite an obsessive fan of Mahavishnu Orchestra, Return To Forever and Soft Machine. Fusion has become a genre I really love. Weather Report is regarded as one of the three best fusion bands together with Mahavishnu Orchestra and Return To Forever. So it is time to visit their music.

This is their debut album.  Joe Zawinul and Wayne Shorter had just recorded Bitches Brew with Miles Davis. Hence the reason why this album is so influenced by Bitches Brew. The music here is much more jazz than fusion. Actually, there is next to no fusion here. The sound is dominated by woodwinds, keyboards, bass and drums. The music is pretty introvert intricate jazz. No less and no more. Melodies are hard to come by here.