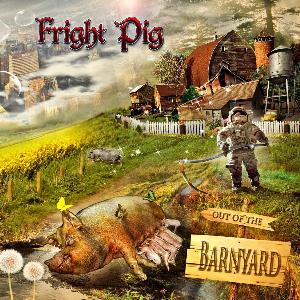 The band is using pork and pigs as a marketing ploy (but probably not in the Middle-East). That says something. The music too is as complicated as a pig, one of the  most intelligent animals around. It is also a very complex animal. Ditto for this album.

I think it is fair to start my attempts to describe their music with claiming that the band had great fun with coming up with this album. They will probably have great fun with reading the reviewers feeble attempts in reviewing this album too. My own review included. Here it goes.....

Out Of The Barnyard is a very playful album with a lot of changing moods and themes. From 1980s AOR and hair metal to long Emerson, Lake & Palmer like passages. That and a lot of power metal and baroque chamber classical music too. This album is in many ways like Yngwie Malmsteen with a quarter of his ego and five times his IQ.

In essence; this is an American album who boldly says we do whatever we likes. Out Of The Barnyard is genre crossing and barriers defining album where even bluegrass has found some space. An album which will be lapped up by the metalheads as well as the progheads. Both communities will scratch their heads.

There are no great songs here. But the band creates a lot of fun and noise with their guitars, keyboards, male vocals, bass and drums. This is a very good album though and should give the band enough interest for them to survive in a very tough market.