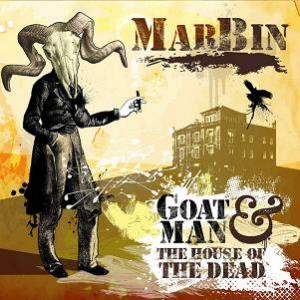 The band is a quartet with a lineup of guitars, saxophone, bass and drums.

The band has released five studio albums and one live album through MoonJune Records, the groundbreaking jazz/fusion/ethno label. And most of you would by now understand that Marbin is a jazz band. One of the hardest working jazz bands in the scene, according to MoonJune Records. I believe them.

I have reviewed their second album, the 2011 album Breaking The Cycle, their third album, the 2013 album Last Chapter Of Dreaming and their 2014 live album The Third Set.

All of them given good to very good ratings.

Marbin has always done very intense jazz/fusion. Probably more fusion than jazz. There is a lot of Jewish and the Middle-East ethno in their cascades of saxophones and guitars. The music has indeed a very ethno feel and sound.

That sets Marbin apart from the rest of the scene and gives them their own identity.

At the same time, I have noted that the music has a very harsh guitar sound on this album. In general too. That is contrasting and balancing up the rather ethno and almost Balkan folk like saxophone.

There are no really great tracks here. The music is another demonstration of their technical abilities. Where there are some strong melodies, the melodies are rather banal and simple. A bit more clever melodies would not been misplaced on their albums.

This is a good album from a band who really impresses me on their instruments but not really with their songwriting skills.