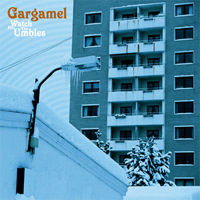 The band was a five piece band with a lineup of clavinet, Hammond organ, Fender Rhodes, synths, bass, guitars, flutes, drums and male English vocals. A guest musican contributes to this party with a cello.

The band has now split up after releasing two albums between 2006 and 2009. Both reviewed here/to be reviewed here. The band also played live many times. Mostly in Norway.

"That's nerdy !!", my girlfriend shouted out after the first ten minutes of this album. She is not a great fan of progressive rock and treat this blog, my most beloved hobby, with a great suspision.

Gargamel's brand of progressive rock is indeed very nerdy. Take King Crimson and merge it with Peter Hammill and Van Der Graaf Generator. Some of the vocals is very Peter Hammill like. The added cello creates a lot of darkness to their sound.

Most of the album is indeed very playful. Krautrock and bands from the Italian avant-garde scene springs to mind. I have seen others mention Amon Duul II and Anekdoten too. I agree with the Anekdoten reference. But King Crimson is the strongest reference here.

The vocals are pretty poor. Strained and not exactly in tune. The music itself is better. Much better. The musicians knows their stuff and the flute adds a lot to the music. Ditto for the cello.

The album is one hour long and the songs, make that tracks, is around the ten minutes mark.

There is no great tracks here and some of the tracks is a bit lacking in quality. So it is barely a weak Good rating here. It is still an album well worth checking out for those of you who are nerds and/or like King Crimson and eclectic progressive rock.