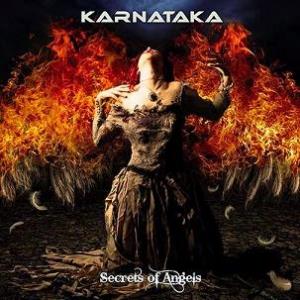 Karnataka has been one of the best female vocals fronted prog rock bands for the last years. Even with a new vocalist in the form of Hayley Griffiths, the band is still going on strong.

Her vocals is supported by four other musicians and a lineup of guitars, keyboards, drums and bass. The usual, in other words.

The band were leaning quite heavy on the keltic folk rock on their previous albums. On Secrets Of Angels, the band ditched that sound and gone for a mainstream and pretty commercial style. A style bereft of any keltic music.

The first forty minutes and seven songs are pretty dull and not particular great. Some of the music is dull and far too soppy and sugar coated. The band has gone ABBA for most of those forty minutes.

Then we get the twenty minutes and four seconds long closing album title track. The keltic influences are back again with a vengeance and the result is a very good song. It is dynamic and epic. It is what the rest of the album should had been. It is what this band was all about before this album.

The end result is a good to very good album. Or as I am falling down on; a good album. I very much prefer the old Karnataka.