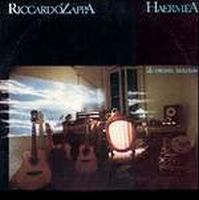 The fourth album from this Italian maestro guitarist.

Riccardo Zappa is regarded as one of the best acoustic guitarists of all time. I have reviewed his first two albums. Two pretty naked albums with acoustic guitars and not much else.

On Haermea, some sound samples, bass, keyboards and drums is added to the mix. The end result is a much more orchestral and fuller sound.

Riccardo is still dominating with his acoustic guitars. His fans would not want anything else than Riccardo's guitars. A lot of layers of guitars on the top of each others. Which is very noticeable here.

The end result is not too bad. The music is still a bit on the less eventful end of the scale and some inclusion of softies classical music here is not a step in the right direction. Nevertheless, this is a decent album. I gladly admit that I am not a fan of his music and I will never be that.