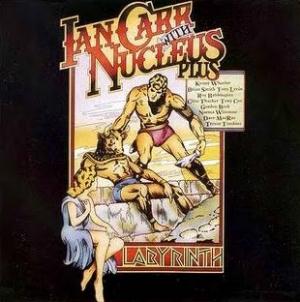 The band had now evolved into Ian Carr & a bunch of musicians called Nucleus on this album. Ten or so musicians to be just about correct. Roy Babbington, later Soft Machine, was still involved here.
The well known jazz soprano Norma Winston was doing some vocals here too. The rest of the names here is unknown to me as I am still a newbie in the jazz scene.

Labyrinth is a concept album about Greek mythology. A guy called Mintour is pictured on the cover, if I am not mistaken. Greek mythology is not my strong side, to put it mildly.

The result is forty-five minutes with a blend of jazz and fusion. There are some pretty good avant-garde jazz here too. Ian Carr's trumpet is excellent here. He is indeed Europe's answer to Miles Davis. Or is it the other way around ? It is debatable.

All musicians does a very good job here on some material which is really good. The end result is a very good album which should appeal to everyone into fusion. Enjoy !