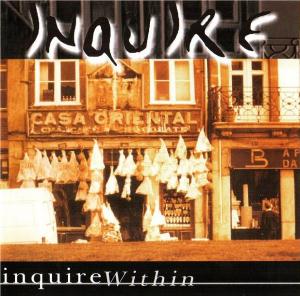 The debut album from this German band who went onto releasing three albums.

The band has been listed as symphonic prog in ProgArchives and that got my hopes up.

Inquire is a four piece band on this album with a lineup of guitars, keyboards, bass, drums and vocals. Pretty ordinary, in other words.

I am not so sure where this symphonic prog comes in here. Well, I do actually understand that and this label is perfectly right. The album starts out as a heavy metal album though and changes over to a much more symphonic and neo prog album after a while. It also incorporates some avant-garde music too.

The album is one hour long and it half of it is occupied by the When Darkness Turns To Light opus. An opus that does not really sets my world alight.

This album is complex, yes. That box is ticked off. But there is no really good music here. Not even sporadic. It is sailing very close to being a turkey. A couple of interesting details saves it's skin. This is not an album worth wasting any time on.