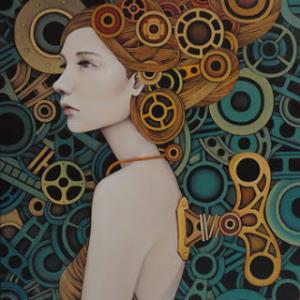 This five piece band has been around since the early 1992 with their debut album released back in 1992. They have not really had a break through and is still a cult band.

Their lineup is male and female vocals, guitars, bass, drums and keyboards. This normally means neo-prog and it is. Very much so. Take neo-prog and add some folk rock. That goes in particular for this album. They are not really a Mostly Autumn'ish band yet. They got at least one and a half foot in the neo-prog scene. The other one is in the folk rock scene.

I find it a bit hard to even write about this album. The band is doing everything right here. A bit Middle-East influences on a couple of the tracks and they are taking other influences too. The only thing missing here is great songs. There is none. This is by all means a good sixty-six minutes long neo-prog album. But nothing more than that. But the band has at least tried very hard to get something going here. But they are still a cult band.