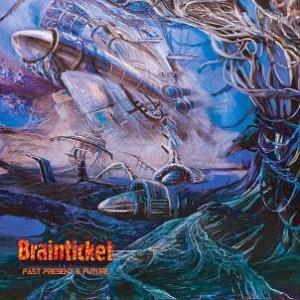 The seventh album from this Swiss band.

Brainticket was and still is one of the best bands from the krautrock scene. Their 1970s album is all worth checking out. The band has recently toured as a part of a bigger space and krautrock package which also included Nektar and Hawkwind. I wish I was there !

The 76 years old Joel Vandroogenbroeck is still the main man in this band as he has been all the time. He is helped out by members of Nick Turner Band, Die Krupps and UK Subs. That in addition to the female vocalist Kephera Moon.

The lineup is sitar, synths, drums, bass, guitars, flutes and vocals. Both male and female vocals. That and a lot of samples.

The result is very much a spaced out krautrock album. An album from outer space, no less. From outer space with a lot of great music too. Most seventy-six minutes of this album provides us with great music in the good old krautrock and space rock tradition. The music floats around and rarely get too close to the sun and crashes to the earth. This is how space rock should sound like !
Best of all; the music has a very organic feel with very little techno bits and bobs. There is hardly anything of it. The album is also very focused with very few waste and mindnumbing dull nodding around.

Is this their best ever album ? Maybe it is. It is hard to argue against this album. It is indeed a great album and I love this one.