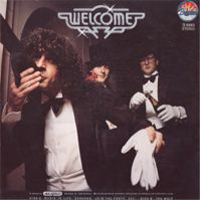 The second and final album from this Swiss band.

Their self titled debut album was a Yes anno Drama copycat. Enough said about that album. Well, it was also a very good album. I was warned that this album, the follow up album was a bit of different kettle of fish altogether.

There is still a lot of similarities to Yes here. Just take off their complex music and turn on the pop-rock tap. The music is still dominated by the Yes sound. That goes for the keyboards and guitars too. Mostly, that is. The music is pretty light-weight, though. It is like Yes were trying to go commercial anno their Drama period.

There is some difference between this and a Yes experiment. The band is Swiss after all and has got this German sound too. The keyboards sound is thick as a glacier. Ditto for the guitar sound. Welcome has also included a children choir here on one of the songs. A cringe worthy song and something Yes thankfully never did.

Some of the melodies here are good. Some are cringe-worthy bad. Most of the album is decent though. I land on a decent to good rating for this album which is better than it's reputation, but not much better.