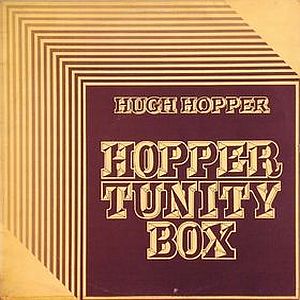 This album was recorded after he had left Soft Machine and in Yes mobile studio. It was parked up in the middle of a big film studio and the likes of Steve Howe and Jon Andersen visited Hugh Hopper during the session as they were old friends from the endless tours around the planet together in their respective bands.
None of these two Yes members played on this album.

Elton Dean on the other hand were very much active on on this record with his woodwinds. And so was the Isotope guitarist Richard Brunton too. Hugh Hopper's own bass is also very much alive here.

The end result is an album with the type of jazz Soft Machine once played. I would also compare this album to Gilgamesh and Hopper's cooperations with Alan Gowen. This album has a large Canterbury feel running through it as blood runs through a body. The sound is very dark at times and so is the music. It is still pretty playful with a lot of vibraphone and percussions here. That and woodwinds.

Hugh Hopper is very much toying with some Soft Machine themes here throughout this forty minutes long album. An album which has some great music too. I now understand why this album is one of the most liked Canterbury albums of all time. It is indeed a great album from the maestro of Canterbury jazz. Thank you, Hugh.