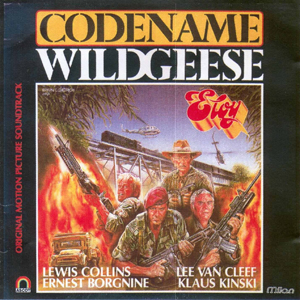 The thirteenth album from this German band.

This is also the first of three albums where these masters of space and krautrock lost their mind and went da-da dilly-dally. Codename Wildgeese is a movie soundtrack to a movie hardly anyone have seen. Well, it has been re-released on both DVD and Blu-Ray now. It is a bad, bad B-movie.

The movie is about cutting of the heroin supply from the golden triangle, ie Laos, Cambodia and Burma. It is supposed to be an all out action movie on a strict budget. So Eloy got this job, then.
Frank Borneman, the main composer in Eloy was now out of Eloy and the band consisted of three guys. None of them came up with anything remotely like Eloy here. Take an AOR song which were probably released as a single to promote this movie + a lot of ambient stuff made by computers.

The result is an abysmal bad half an hour long album. Half an hour too long in my opinion. It truly disgraces the Eloy name and brand. It is as good as turkeys come. Hence my verdict.