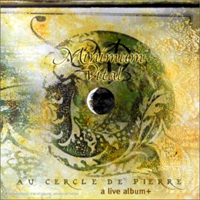 The one and only live album from this French band. A band who released six studio albums in their time. This live album comes between their fourth and fifth studio album.

Minimum Vital is one of those sadly overlooked European bands. Which is a pity as their six albums were pretty good. OK, perhaps not their very hard to find first album. But the rest is interesting albums.

Minimum Vital is also one of those bands which I find hard to pinpoint. Based on almost chamber like folk music from Britanny, the band also broadened their music into jazz and symphonic prog. On this album, dare I also say zeuhl. There is a lot of zeuhl structures here with the female and male vocals. Where did that come from as I cannot remember that from their studio albums ?

In addition to the female and male vocals, there is a lot of keyboards, woodwinds, guitars, strings, bass and drums here. The band has laid it on here. It is a real celebration of this band. A one hour long party, no less.

The end result is a very good live album with a great sound and some rather unusual music which really works as a treat. I am not a fan of live albums. But this one is well worth checking out. Do it.