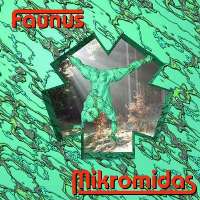 The second and final album from this very obscure and long forgotten band from Stavanger, Norway.

I reviewed their debut album Brennende Drommer back in September 2009 for/in ProgArchives. It took me 5 years to follow up that review with a review of their second album. Time flies !

Faunus is a much more contemporary sounding album than the rather 1970s sounding debut album. The band still got Norwegian vocals with some Mellotron, Hammond organs, bass, keyboards, drums and guitars. The sound is OK. The vocals rather dubious.

The music this time is much more mainstream rock and rather neo-prog like. There is not much 1970s symphonic prog left here. The Mellotron is nice and the band should have used a lot more of that to really follow up the Swedish bands from that time.

The songs are not that interesting and I find myself looking out the window at my office and looking at the roof at lot during the listening sessions. The songs are not particular good and the band not the most interesting there is. The music here should be down my alley. This album is not, though. This is a decent album and nothing more than that.