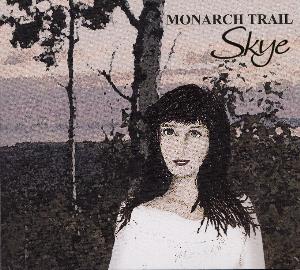 Monarch Trail is another musical vehicle for Ken Baird, a veteran in the scene. He is here helped by members of his backing band. Voila ! We got Monarch Trail.

I am not entirely enlightened on what Ken Baird has done in his solo career. I only know he has done a lot. This album is a bit different from his other work. This album is pretty polished symphonic neo-prog.

We get plenty of guitars, piano, vocals, keyboards, bass and drums. Another veteran in the Canadian scene; Steve Cochrane guest on guitars here.

This album only have four tracks. But they are very long four tracks. One clocks in at twenty minutes. The album clocks in at forty-six minutes. This is no EP !
Thankfully, it is not an album with time wasters and album fillers either. The album does not have a single wasted minute. All four tracks are full of catchy melodies and details. The choruses are really great here and I can see a commercial winner here. Which is a bit strange with these long songs. The album still sounds commercial to me.

This is by all means a great album, only slightly let down by the lack of a killer track. Besides of that, this is a great album and one to remember this year for. Can we get a second serving, Ken ?