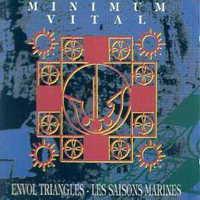 A collection of old tracks from this French band.

That album and the other tracks here is very different from the rest of this band's material. Slick jazz/fusion is what we get here. Think the TV series Miami Vice and other similar TV series. This compilation album has the same slick music as those TV series. Slick, slick, slick. Also very sweet as in an overdose on chocolate and sugar.

In short, this compilation is only for those suckers, myself included, who want Minimum Vital complete. The album collectors out there. The music is decent enough, but it sounds outdated by three decades at least. I am sure you can use your money on better things than this album.