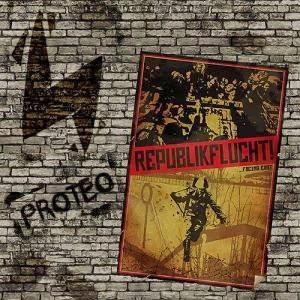 We are strangely enough neither in symphonic prog land or in avant-garde prog land. Instead, we are landing in the growing Italian neo prog scene. A scene which has given us a lot of new bands lately. Although, as I pointed out in my review of their 2009 debut album Under A Polar Red Light, this band is much more an art rock band than a neo prog band. That same goes for this album too..... largely.

The band makes a lot of elegant sound collages on this one hour long album. The music is created with keyboards, guitars, bass, drums and English vocals. The songs are on average ten minutes long and I guess this is a concept album about the Berlin Wall and Eastern Germany. The life behind the iron curtain, in other words.

The music is elegant enough and win some brownie points on that. There are some more vaudeville like pieces too on this album. All of it very elegant and the same can be said about the sound too.

Elegant does not necessary creates any great songs. There is a lot of interesting details on this album and the vocals are very good. The overall quality is also good. There is no killer tracks here though and that is my only gripe with this album. It really needs great songs. This is still an album well worth checking out.