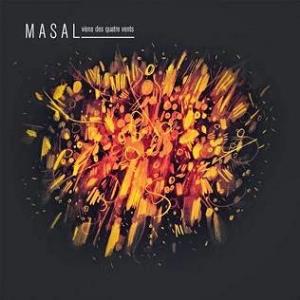 Masal is a project by Jean-Paul Prat from France. Masal is being listed under his name in ProgArchives and other places. I just list it under the Masal name for now. Maybe I am wrong.

Anyway, it the music that counts. This is the fifth Jean-Paul Prat/Masal album since 1982. Not an impressive amount of albums. But it seems like the quality is pretty high throughout. This album is my first meeting with this constellation.

Take a big slice of jazz, add dark avant-garde in the Univers Zero/Present mould and add some dark zeuhl too. That is in short this album. An instrumental album made by saxophones, piano, keyboards, guitars, bass and drums. The piano here makes me think about zeuhl although the music is pretty mid-tempo and not so busy as in zeuhl. The piano makes a lot of this album in addition to the saxophone. This is most of all a jazz album though. A pretty somber jazz album which sometimes almost takes the form of a funeral dirge.

The sound is great and I really like what I hear throughout these three quarters of an hour long album. I wish it had a bit stronger material. This is still a very good album and one I recommend. Check it out.