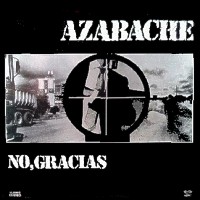 The second and final album from this Spanish band.

Azabache were formed from the ashes of Azahar and went into a much more symphonic prog direction than Azahar. A band much more in the folk rock mould.

The year was 1980 and the punk had swept away the prog rock scene. Azabache also adopted to the new era by releasing an album with much more pop rock tunes than symphonic prog tunes. The Spanish vocals is still powerful and ditto for the keyboards sound. The use of Spanish guitars, violins and flutes adds a bit of a Spanish flair to the music too.

The main feature here is pop rock though. Sometimes with passionate love ballads and the full emotional commercial works. This is most certainly a Spanish album with little or no appeal to anyone outside the Spanish sphere. That means Spain and South America.

I find this album quite decent. It is by no means a good album and it is a solid letdown after the promising debut album. It is a decent album.