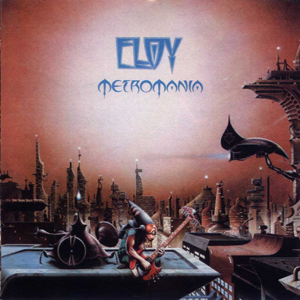 The twelfth album from these German masters.

The 1980s had finally arrived at this band too and the realities of the plastic fantastic sound which dominated this decade. The lost decade in music, in my view. But the general public loved it and still love it, taken into the account the many successful "we love the 1980s" festivals popping up these days. Eloy had to adapt to these new times too and the result is this album.

We still get Frank Borneman's vocals here. He is helped out by children choirs and lot's of male and female background vocals. A very plastic sounding synth is also present here. The guitars are very Pink Floyd'ish. The drum sound is also very 1980s and the bass pretty poor.

The songs are a mix of overproduced and overloaded tracks with the 1980s sound. They are in the pop and rock style with some heavy guitars dragging some of the music into the heavy metal field.

The end result is a pretty over-bloated 1980s album. It is still an Eloy album though. It is only a decent album too which I am not enjoying that much. There are far better Eloy albums out there.