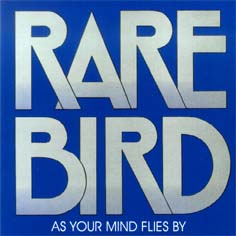 Their self titled debut album was a good wake up call for me as it made me discover this band. One of the more unknown British bands. Unknown but not bad.

The band was a quartet again with a lineup of guitars, keyboards, bass, drums and vocals. Graham Field of Fields was still with this band.

This is an half an hour short album. But it really throws a punch. Take some Barclay James Harvest, add a lot of ELP and some blues. Then you get this album.

The band is playing around the tones and melodies a lot on this album. They are even visiting ELP compositions a couple of times.

The Hammond organs takes no prisoners at all while the guitars too is making a lot of great noise. The bass and drums is thundering around in the background.

This album is dominated by the twenty minutes long Flight suite. A very good suite where the band is visiting a lot of different scenery. Just like a bird would do. Well, at least a big bird like for example an eagle.

There are some shorter songs here too which is good to very good.

The end result is a very good album which offers up a lot to everyone into progressive rock. Rare Bird is most certainly a band which deserves a lot more attention from the prog rock community.