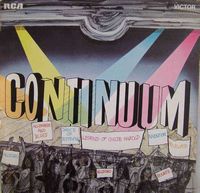 The debut album from this Czech/Dutch band.

This quartet was formed when the Czech classic guitarist Yoel Scwarcz emigrated to Holland and linked up with another classic guitarist, drummer and a bassist. Yoel also plays flute, harmonica and recorder here.

I like jazz and fusion a lot. So I purchased their two albums when I got them offered to me by another reviewer and music fan. This on the basis that this band is listed as a jazz/fusion band in ProgArchives.

This album is not exactly what I thought it would be. Maybe I should had read the lineup before purchasing this album.

This album is instrumental and acoustic. It starts off as a mix of classic music and folk music. It only sporadic dips into jazz. Mostly because of the jazzy double bass. There are also a foray into more avant-garde music. But that is a brief foray. Most of this album is about the two classic guitars.

This album is forty minutes long and it is not a great album. It is a rather poor album. The double bass and the decent brief foray into avant-garde saves it from being a turkey. But it is a close call. Avoid this album.