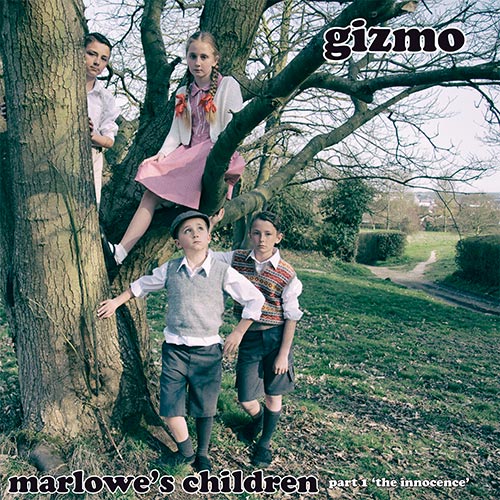 The fifth album or so from this English band.

This band has been around since the mid 1970s on a hobby basis. I have reviewed a couple of their albums. Hence, I got this album sent to me. It has taken me long time to get my head around it.

I thought Gizmo was history after the tragic passing of their guitarist Martin Reed. But thankfully, I was wrong.

Gizmo is a bit all over the place in their history. I don't really understand why they are not listed in ProgArchives as they are a proper prog rock band in my view. An eccentric English prog rock band, that is. Weird, in other words. Proper weird.

The band sounded like a blend of Bowie, Zappa, Caravan and 'Generator on their self titled 2012 album. On Marlowe's Children, they have still retained those above to a larger and/or smaller degree. This though is a concept album. A forty minutes long concept album with a lot of weird stuff. Some of the weird stuff reminds me a lot about Madness and that off kilter ska scene. Nevertheless; the first band that pops into my head when listening to this album is Gong.

Yes, Daevid Allen would have been pleased with this album. There are a lot of Gong'esque over the very nice and uncomplicated pop tunes on this album. Pop tunes, but still weird as proper eccentricity.

The songs here are very good and so is the weirdo stuff too. The vocals is also very, very good. Almost Beatles like at times. And funny enough, The Beatles is also another very good reference for this album.

In short; this is a very good album from a criminally underrated band.