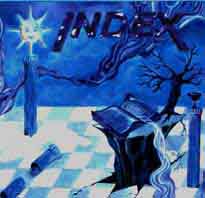 Index is a quartet with a lineup of guitars, organs, keyboards, bass and drums.

Index was formed by an ex Quaterna Requiem member. Which may explain why this album starts with a track called that....

I got a live DVD from them called Index Ao Vivo some years ago and reviewed it for ProgArchives. The review can be found here.  The video, a gig live in studio, was the band, cameras and the audience. Very easy and cheap to make. But it also reflected very well on the band too. It is a good DVD.

Index offers up no-nonsense instrumental symphonic prog rock in the area between Camel and ELP. It is not particular bombastic. Neither is it particular folky either. It is a mix of those two bands.

The music is driven by the organs and the keyboards. The guitars chimes in now and then. But this is mostly about organs and keyboards.

The music is not the most exciting in the world and lacks a lot of identity and flashes of inspirations. This is a workman like fifty minutes long album. I cannot fault this album. Neither can I claim that this is a good album either. Hence my rating of this album.