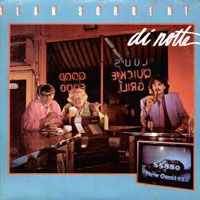 Alan Sorrenti's debut album Aria is supposed to be a very good album. I have just purchased it and I really hope so. And I hope it is a really good Italian prog rock album too.

Alan Sorrenti had found a lot of local fame and fortune with his appearance in the annual European Melody festival. A festival known for it's outright terrible music and Euro pop. He had also had a major hit single taken from the 1979 album, LA & NY.

The result is a turkey of an album. Something the cover more than alludes too. This album is as bad as they comes. It is one of the worst record label released albums I have ever heard and that says something. Avoid at all cost.