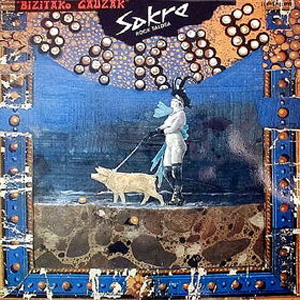 Spain has always had a great folk rock scene. A scene ranging from the more hard rocking bands to the more traditional folk rock bands. Spain is a collection of very independent regions/nations too. Each region/nation got their own very folk rock scene and to a large extent; their own sound too.

Sakre is a Basque band and they are more on the hard rocking and rock end of the spectrum than the traditional Basque folk music end of the scene. Most of the music here is hardly folk rock at all. If any at all.

The band was a four piece and they used drums, keyboards, guitars, bass and local vocals on this thirty-six minutes long album.

The music is not bad at all. There are some catchy stuff here and I really like the keyboards. That aside, there are no good songs here. Hence my verdict.