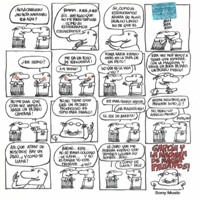 The first of two albums from this Argentine band. One of many Argentine prog rock and fusion bands in the 1970s.

The band is a five piece on this album. The lineup is mellotron, organs, piano, guitars, bass, drums and Spanish vocals on this forty minutes long album.

The sound is off course vintage. The music is a mix of everything. From funk via Queen like rock to Genesis, the Trespass era. We also get some pretty heavy stadium rock here.

To say that this album is a mixed bag is pretty fair. The common nominator is rock though with some progressive rock, funk and fusion influences. The album was pretty commercial anno 1975 and I guess they got some good record sales in Argentina.

This album is a good effort and a decent to good album. It is a pretty good and cosy album. That's really it anno 2015.