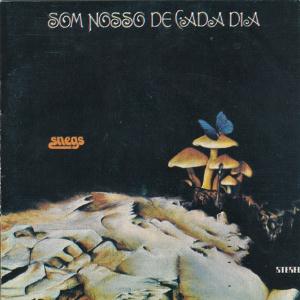 The original LP had a terrible sound and did not do this album any justice whatsoever so I am reviewing the CD instead. The CD includes a new composition as a bonus track.

This band was a three piece band with a vast array of instruments. That includes flutes, violins and plenty of synths.

The music is a blend of ELP like symph prog and a lot of South American symph prog and folk rock. The vocals are in Portuguese and they are pretty good. Ditto for the sound.

My problem with this album is the lack of any really great songs and the final half of the album which is instrumental and pretty dull to be honest. The first half of this album is good though. I am really having problems working up much enthusiasm for this album and rates it as somewhere between decent and good.