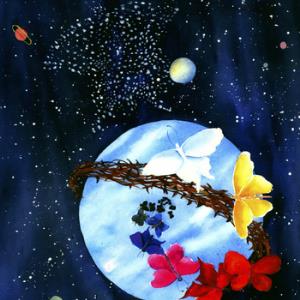 The second album from this US one man band.

New York to be more precise and the man is Dan Costello. I really liked the first album a lot. It is named A Sound & Space, Agreed and was released two years ago, in 2013. Both albums is Name Your Price albums from Bandcamp.

You can safely get both albums. This time, Dan has even got an artwork I really like. I was not a fan of the artwork on the 2013. That is me splitting hair... again. It does not mean an atom at all. The only thing that matters is sound & music.

Dan is playing all the instruments here (bass, guitars, piano, drums and vocals) bar the flutes and the female vocals (shared by two vocalists). He has also done the productions and mix here. The latter one is the weakest point of this album. A bit more beef and oomph on some tracks would had been better. His vocals and the instruments are very good.

The music is, as on the 2013, light and airy prog rock. The music is not overly technical. It cannot be because Dan is only a human being. That is obvious. It is also obvious that Dan is one of the better song writers around as he has put all his eggs where his main strength lies: The difficult art of coming up with great, interesting songs.

And he has succeeded. The album is mainly a tour de force in post-millennium progressive rock light. This album contains fifty-one minutes with interesting songs. Most of them with a strong piano and vocals theme. Dan Costello is from New York and that shines through on this album.

In short; this is a great album and one of the better ones from last year. And it is a Bandcamp album and a great, great credit to Bandcamp. It is also a great credit, not to mention a great triumph for New York and Dan Costello too. A weak, but still a worthy four points is heading their way.