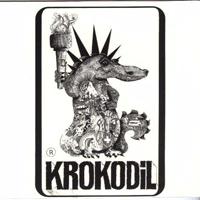 The debut album from this Swiss band.

The band was a five piece band with a lineup of guitars, sitar, violin, piano, flute, bass, drums, harmonica and English vocals.

Krokodil released five albums between '69 and '73. All of them will be reviewed by me. The band was regarded as a krautrock band throughout their career. Hence my interest in this band.

This, their debut album was a much more straight blues-rock album than anything else. On the surface and in your face, at least. But there are strange things hiding in the details.

It is pretty obvious from the sitar and the strong leanings towards Indian music on a couple of tracks that the band was on the move towards a much more psychedelic landscape. Indeed, most of the songs here has a pretty notable psychedelic twist.

Psychedelic blues-rock ? Indeed, their music is.

This is by no means the most interesting music around in my views. But this forty minutes long album is pretty charming and it has some good stuff.

This album even sounds timeless at times. Which is quite an achievement. I am not fully charmed into submission by this album. The stuff is somewhere between decent and good. Check out this album as you may find it your cup of tea.