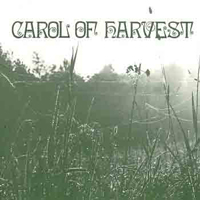 Carol Of Harvest was a five piece band with a lineup of guitars, bass, drums, synths and vocals.

The band has so far only released two albums. My August 2010 review of their 2009 album Ty I Jar can be found here. The band promised a lot more albums in an interview I also did with them. None has yet to see the light of day.

Carol Of Harvest released their (much sought after among collectors) private-pressing album in the aftermath of the passing/death of the German psych folk rock scene. Yes, Sex Pistols and punk was all the rage and nobody had any time for the likes of Carol Of Harvest.

Largely thanx to the excellent ProgArchives, the interest in this band and this album is here. That 30 years after the releases of this album. Which says everything about the power of the internet and the mankind.

And this album is a pretty special album. The female vocals of Beate Krause is special. And so is the guitar solos of Axel Scmierer too.

The psych folk rock here is both pretty much folk rock orientated and a bit psyched and spaced out. The genesis of the music is folk music. The arrangements takes it into psych and rock territory.

The music changes between pastoral psalms like and harder rocking stuff. This makes an interesting mix to say at least. There are several synths and guitar duels here too. That also makes for some interesting listenings.....

The overall quality of the music is really good throughout. There is no great stuff here. But folk rock fans should really lap up this album and the forty minutes of music here. Check it out !