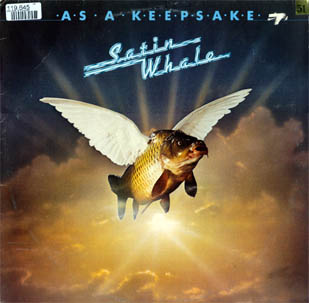 Satin Whale was a quartet with a lineup of organ, piano, keyboards, guitars, drums, bass and English vocals. A female choir and some woodwinds, flutes and strings also contributes to this album.

I have to say I have not been the most impressed reviewer of their previous albums Desert Places (1974) and Lost Mankind (1975). You will find the reviews here and here. Their hard blues rock is really not my thing.

So imagine my surprise when I got this album.....

The band has changed their direction.... slightly.... on this album.

Gone are most of the soul and the blues music and sound. It has been replaced with a mix of space and symphonic prog. It has been replaced by Eloy.
I did not know that Eloy was that influential. But Satin Whale has taken a big chunk of ideas from them and added it to their music. Add some soft music too and you get a pretty heady mix.

This forty-five minutes long album showcases a pretty mature band and a band in transition. In transition to a much more commercial and cinematic sound and music. The two albums that followed is like that.

I pretty much like this album and rate it as their best album. It is indeed a good album well worth checking out.