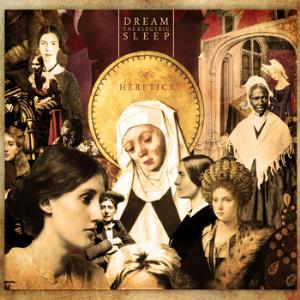 Dream The Electric Sleep is a trio with bass, drums, guitars and vocals. I do suspect that the band also has got help from a synth player too.

I was pretty impressed by parts of their debut album. A pretty radical debut album. Perhaps too radical for me.

The band is by no means pussy-footing around on Heretics too. The band is very much based in the post-punk and post-rock scene and sound. But the difference is that they have not rejected the music from the likes of The Beatles, Yes, King Crimson, Pink Floyd and the 1970s bands. They have embraced and incorporated it into this album.

Heretics though is a progressive rock album. It is also well over an hour long too. And it has eleven songs.

The album is surprisingly very songs orientated. But there is a heck of a lot going on in each of the songs. The vocals are also very good.

There is also surprisingly many very pastoral minutes and songs here. Some of the music is almost entering The Beatles, post Rubber Soul territory. I am most surprised !

The sound is still post-rock and pretty hard-edged. But the music is also very good throughout. I am absolute certain that this band has hit on something and I hope they will develop it further. I am very much looking forward to listen to their 2016 album. In the meantime, I really like this album.