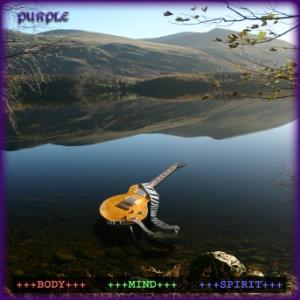 The third and so far the latest album from the UK one man project Purple.

I have reviewed the previous two albums too and I am failing to be impressed by Purple. The project has evolved a lot over the three albums though and that is a positive.

Dan Hodgson is still doing all the composing and instruments though and herein lays my main gripe. Although I as an author prefer to write all my novels alone, I still thinks the creative processes from coming up with ideas for music to finally record them needs inputs from more than one mind, one person. There is a huge difference between novels and music albums.

That difference can be heard on this album. Dan has turned his attention towards folk music and more jazz on this album. The music is pretty much idea based where the ideas has not been worked on properly. Thankfully, the music has been recorded with a vast array of instruments, computerized or not.

The end result is decent enough. I still think the music here should be filtered through a band where the unworkable  things had been removed and the ideas that work recorded and released as an album. The album is fragments based. Check this album out for yourself from the link below.