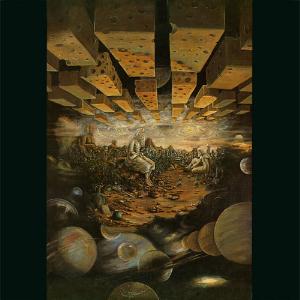 The debut album and in reality the only album from this Swedish band. Their second album Delayed was released long after the band had been disbanded. Review to follow.

The Garden Of Elks, as the band's name are in English, has taken krautrock and made it into a Swedish thing, complete with the full IKEA furniture range. Take a large chunk of Swedish folk music with violins, sad melancholy, psalms and minus thirty degrees cold weirdness. Add the likes of Amon Duul and the weirder part of the krautrock scene to the mix. Then you end up with an album like this. A sixty five minutes long album with a very good sound too.

The music is very fuzzy throughout with a lot of tape loops and synths. There are some guitars, vocals, piano, bass and drums here too. The violins is also pretty dominant at times.

Besides of being a Swedish take on krautrock, the album can also be labeled in the avant-garde genre. The music here is not easy listening by any means. Not all the sixty five minutes on this album is good too. There are some very good stuff here though too. The mix of krautrock, some Indian music and Swedish folk rock makes this a pretty unique take on the krautrock genre. Or for that matter; the avant-garde genre.

The album has a great ambience and good enough stuff to make is a very interesting album. I would rate this as a good album, well worth checking out.